How to Avoid Getting Water In Your Nose While Swimming? 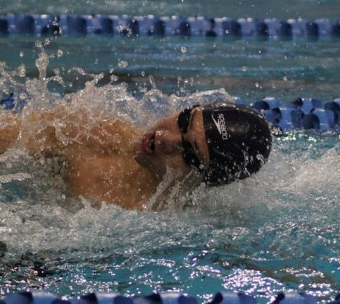 The year is 2012 and the Summer Olympic Games are underway. As the women’s 100-meter backstroke is about to begin, all eight finalists make their way to the starting blocks to begin their pre-race routine. Soon-to-be Olympic champion and world record holder (in multiple events), Missy Franklin, stands behind lane 5 in the middle of the pool. Something that makes her stand out from other swimmers is a clip that she places on her nose to pinch her nostrils together. The two women in the lanes next to her do not have a clip on their noses. As she touches the wall first in 58.33 seconds, she looks up at the scoreboard, removes the nose clip, and continues with a victorious celebration.

One of the biggest questions that swimmers all over the world frequently ask is, “why did Missy Franklin use a nose clip when other swimmers in the same heat did not?” The answer to this question is simple. Missy Franklin wanted to avoid getting water in her nose and the clip made it easier for her to do so. The nose clip does not allow a swimmer to use the nose for breathing and consequently the swimmer must resort to mouth breathing, which is the goal. Whether an individual prefers to use a nose clip or not, the bottom line is that every swimmer at every level aims to avoid getting water in their nose. In fact, one of the first key skills that every swimmer is taught is how to blow bubbles in the pool. Blowing bubbles teaches swimmers to use their nose and release oxygen while their face is submerged in the water to avoid swallowing or choking on water.

Three Ways to Avoid Water Entering Your Nose While Swimming

I have been a competitive swimmer since 2003 and have seen a lot of people (including myself) master the skill of avoiding getting water in their nose in different ways. Just like every skill, the only way to achieve perfection is to practice. In this article, I will go through three of the most efficient ways (step by step) that I have found to practice avoiding getting water in your nose while swimming.

Note: You should have a supervisor (one that knows how to swim) at all times for safety purposes.

10 & Under- Four to Six weeks of daily practice

11 and Over- Two to Five weeks of daily practice

Avoiding water inside your nose on your back seems a little more tricky than on your stomach, but it doesn’t have to be. Most people might begin to panic as soon as they go on their back, but the key is to remain calm and tread water lightly (emphasis on the lightly). If you remain calm, you have a better chance at achieving a perfect balance in your body where you can remain afloat with minimal waves.

10 & Under- Five to Seven weeks of daily practice

11 and Over- Three to Six weeks of daily practice

This is my personal favorite way of learning to avoid getting water in your nose because it is the easiest in my opinion. I like to compare this technique to bowling bumpers. In this case, the nose clip acts like a crutch until the swimmer feels comfortable enough to not use it (although some swimmers prefer to keep using it forever). The best thing about using a nose clip is that swimmers can almost immediately start swimming without any water in nose issues and learn to inhale and exhale from the mouth. This is what makes this technique so efficient and easy to learn.

I personally learned to avoid getting water in my nose by using a nose clip in practice until I no longer felt the need to, but it is important to understand that very individual is different and learns in different ways. There is no right or wrong when deciding what technique to use. The important thing is to avoid water in the nose by breathing through the mouth. I like to think about it as strictly “mouth breathing”. Your nose should only blow air out and never in. Although this is the most important skill in all of swimming, it is also important to not stress if you cannot master it at first. Remaining calm and confident is a major part of success for this particular skill. It takes time and some will get it faster than others, but it will come with practice no matter what. Keep practicing and avoid all that water in your nose!

My name is Mariano Adame and I am a swim instructor from San Diego, California. I was a competitive swimmer for the majority of my life. I swam up to the collegiate division one level at West Virginia University where I received my bachelor’s degree in Public Health and my minor in Forensic Science. I specialized in the 100 and 200-meter butterfly events. Swimming played a major role in shaping me into the person I was and continue to be. Swimming can benefit people in many different ways including exercise, discipline, and most importantly the importance of understanding water safety. As a public health major, I understand that lack of water safety education is a major concern around the world. I hope that I can teach others what I have learned about swimming throughout my life and hopefully make a difference in people’s lives.

Let’s face it: if you’re an adult facing your first ever swimming lesson, you’ve probably got some anxiety about what you’re getting yourself into. Don’t.
Adult Swim Lessons | 9 Min

There are a host of reasons why a non-swimmer parent should consider taking adult swim lessons. Water is a kid magnet. Due to that fact, drowning is the leading cause of death among children. Anyone with kids will soon find their children want to be in or around water in some way or another at some point.
Adult Swim Lessons | 4 Min

4 Tips to Learning How to Float for Adults

Learning how to float or swim as an adult can be an intimidating task. With a variety of different body shapes, sizes, density, and compositions it might be difficult for some to learn to float than others.
Adult Swim Lessons | 4 Min