Plenty of children are afraid of taking that plunge of faith and dunking their head into the water below. Even when they are not afraid of the water, they may still struggle to get their whole head under the surface. Chances are, if you’re reading this, you’ve already gone through the basics: a giant smile, hand-holding while attempting to get them to dunk, and lots and LOTS of encouragement! Unfortunately, not every child has that same positive outlook, and is going to require some new techniques to conquer the dunk.

Most swim lesson frameworks involve step-by-step acclimation, as it is a prove-to-work method for getting children comfortable and willing to submerge themselves. My techniques utilize that method, but I will provide explanations as to why. Oftentimes parents and even teachers overlook why a child is unable or unwilling to do certain actions in the water, and understanding why they do so is the first step to achieving their goals. Having nearly a decade of teaching experience, from babies to seniors, I’ve had enough experience to develop some of my very own techniques which have proven successful with even the most tentative and afraid students. If you’re running out of ideas, here’s some more that may help!

As I’m sure you know, little ones tend to LOVE games! Sometimes, making a game out of things your child does not want to do, is just enough to entice them to try. Inch by inch submersion is a technique that can be turned into a game with personal bests. The principle is simple - have your child lower themselves into the water inch by inch, and count each inch that your child successfully conquers as a point. The more points you get, the higher your score! 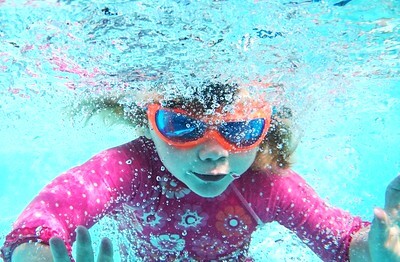 Have your child bend their knees a little each “round” and see how many rounds they can go before giving up. Your child will likely have to come up for air in between rounds when they get deep enough that the waterline is consistently above their mouth; this is okay! If your child has to come up for air, you can press a finger to their face pinpointing how far they got their head underwater before coming up, and use that as the starting point for the next round. Or, you could go the even more fun route and get a scuba mask so you don’t have to interrupt rounds! Kids love water toys, and for some, scuba masks are just another toy!

This technique works for a few reasons. First, it acts as a distraction from the ultimate goal - rather than thinking about how they’re expected to get their head entirely underwater, they’re now thinking about how many rounds they can go, and beating whichever records they’ve previously set. Second, this can help you assess why your child is struggling to dunk their head. If they continuously stop at the same place, right beneath the eyes for example, then they may be tentative about having their eyes underwater. Or, perhaps they stop right before the ears, and that could be part of the issue! Identifying these concerns is key - you can then accommodate them (i.e. goggles and/or ear plugs). While you may not want your child to utilize these “crutches”, chances are, your child will get water in their eyes and ears eventually, even with goggles and ear plugs. And when that happens, you can possibly begin weaning them off the “crutch”!

Remember though, this is a game! Each lesson, try to have your child beat their previous best, so be sure to record or remember what they got last time!

Some children may not actually fear their face getting wet, as is often presumed when a child struggles to dunk their head underwater. Rather, their hesitation to submerge is caused by the fear of losing control and being entirely submerged. But how do you determine if this is the case? By doing a little test that I like to call Starfish Gazing! Unfortunately, this method will not work for most above-ground pools, unless you have a deck attached that is level with the surface of the water. If you have a ground-level pool, however, this technique may work for your child! 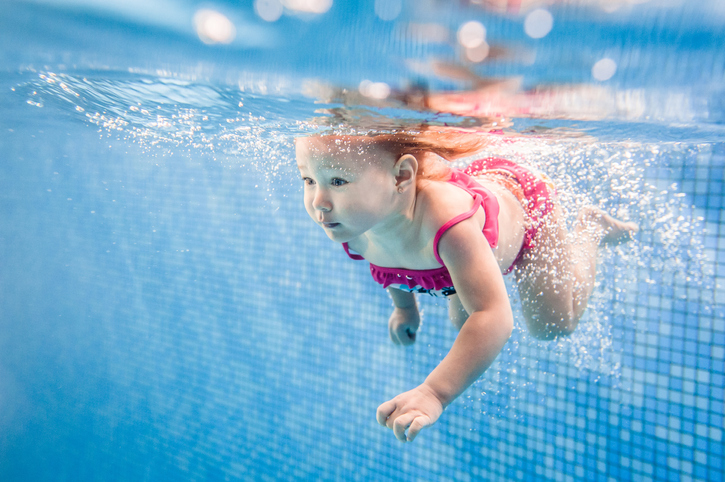 Generally I use this technique when I’m trying to assess whether a child fears getting their face wet or if the issue is deeper-rooted. Usually, children who refuse to let go of the wall or insist on only going in the water so long as they can hold onto someone else, tend to like being grounded. Not grounded as in no television for a week, (what child likes being grounded in that sense?!), but grounded in the sense of maintaining control. Pools are a completely different environment than what human beings are naturally used to. At home, at school, at the park - all of these environments have the same principle which your child, or you for that matter, don’t even think about. Air. Time for a brief physics lesson!

No human being is lighter or less dense than the typical air we breathe in or walk through. Air cannot be manipulated the way we can manipulate water, at least not with just your body. Subsequently, you’ll never be capable of not having your feet planted on the ground when you stand up, unless you’re an astronaut. Water on the other hand, is a very different story. Some human beings will be lighter and/or less dense than some bodies of water, and some humans will be heavier and/or more dense. This means one essential thing - it IS possible in water, to have your feet NOT planted to the ground. This may seem obvious, but it’s important to think about. To take your child from the environment they’ve grown up in and gotten used to, and to expose them to a new environment can be terrifying. Your child has realized that air and basic movement are no longer things they can take for granted.

This realization, means fear. It’s a basic biological response, to fear not being in control of the most basic things you require, such as oxygen, things you never had to actively think about in order to get before. With that being said, this technique allows your child to retain control over breathing and movement while putting their face in the water. Being physically outside of the pool helps ground students by giving them the safety net of knowing they are still entirely in control and are less likely to “lose their sense of direction.” So how does it work?

For Starfish Gazing, you’ll want your child to be outside of the pool laying flat on the pool deck with their head hovering face down over the water. Students should be encouraged to wear goggles and look through the surface of the water to see the calmness of the water beneath. This technique will help you assess why your child is struggling to dunk their head underwater. If your child refuses to put their face in the water, then having their face wet is likely a huge reason they’re struggling with dunking. You’ll need to take a few steps back from dunking in the meantime, and simply get them used to the idea of having water on their face. Start with the bathtub or the sink and slowly acclimate them, or try the inch by inch submersion method if they’re content being in the pool.

If, on the other hand, your child is content with this method and doesn’t mind putting their face in, then the problem with dunking is more likely losing their sense of being grounded and being in control. If this is the case, please see my next technique, the Duck and Cover! 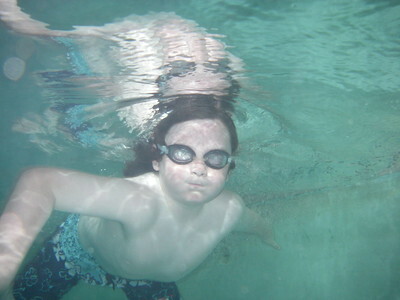 Sometimes students are okay with having their face underwater, but have a tough time coping with the potential loss of control which they possess outside of the water. Further, some children actually have a hard time simply knowing where the top of their head is! I came up with this technique when helping a student who had both problems. So how do you identify when your swimmer is having these issues? First, you can try the Starfish Gazing technique. Second, you can look for other signs; these students tend to be more afraid of the bottom of the pool, or letting go of the edge, and they often kick their legs while practicing dunking to ensure they stay upright but therefore hinder themselves when trying to get their entire head underwater.

I realized that some students have a difficult time knowing where the top of their head is when one of my students was struggling with dunking his head under the entire way. Each time he’d attempt it, he would only manage to submerge himself up to his forehead just above his eyebrows, but whenever he resurfaced he would beam at me and shout, “I DID IT!” After a few times of this I realized, he actually thinks he’s getting the top of his head underwater! How do I make him realize he’s not? And after giving that some more thought, I present to you, the Duck and Cover technique!

With this technique, you’ll start inside the pool where there’s enough depth for your child to successfully dunk themselves. Have your child hold onto the edge of the pool with one hand, allowing them to retain a sense of control. Have them then place their opposite hand flat on top of their head. From there, have them attempt submerging with the goal being to get the hand on top of their head wet. For whatever reason, some children are more capable of sensing when their hand is wet, as opposed to the top of their head. Don’t ask me why - that’s a question for a different kind of professional.

In any case, this method works! It may take a few times, but even for the most tentative swimmers, providing a sense of control by grounding them with one arm on the wall and giving them awareness by having their hand on their head can be useful steps in finally getting to that fully submerged dunk!

Need more assistance from a private swim instructor? Hire a Sunsational Instructor to come to your own home or community pool!

Hello! My name is Nyra and I am a 25 year old law school graduate who is preparing to take the bar exam. I have an extensive swim background involving 15 years of competitive swimming experience and nearly a decade of teaching and coaching experience. I have taught all age groups, from babies to seniors, and have worked as a supervisor for lesson programs in my area. I've found that my law school experience has actually benefited me as a swim instructor, as it's caused me to think more critically about what my swimmers are doing wrong, why they do it, and how to change those behaviors so they can successfully become better swimmers! Swimming is an amazing skill set, and an important one! And I love being able to help others improve and develop that those skills!

Can My Child Swim with Ear Tubes?

How to do Flutter Kicks in Swimming

Plenty of children are afraid of taking that plunge of faith and dunking their head into the water below. Even when they are not afraid of the water, they may still struggle to get their whole head under the surface
Swim Lesson Tips | 8 Min